It is 08:00, Wednesday 23 June 2021. Location; Homegrown Farm, Centurion, South Africa. Although this venue has hosted 6 previous bootcamps, the 7th Homegrown Radio Bootcamp was different in so many ways. With a third Covid-19 wave and an adjusted alert level 3 lockdown announced, the number of attendees was significantly reduced to adhere to the restrictions. This was a blessing in disguise as it allowed for a more focused and intense training session. However, not all was lost for those who couldn’t make the cut for the physical attendance because the bootcamp was streamed live on Instagram and Facebook.

After several unsuccessful attempts to escape this life in a body ridden with scars from stolen razor blades, I was officially at rock bottom. At 100kg’s, I was extremely over weight, paralysingly unproductive and chocked by loneliness, I was consumed by pain and self-hatred – there was no light at the end of the tunnel. Negative thoughts cushioned my destructive behaviours.

Finding comfort in processed foods, I found myself almost automatically by a drive thru window – sometimes even more than twice a day. I recall ordering a triple decker from Debonairs, 18 Chicken Licken hot wings, a packet of orange Doritos, which would go hand in hand with a large packets of Jelly Teddies, this all before I get home open up that Mr D app to get myself some ribs.

As you know, one has to wash down the torture and the guilt, this would go perfectly with a 2litre beverage, and a six pack of something alcoholic and of course do not forget the two bottles of wine. With my phone turned off and everything an arm’s reach away it was time to put on my Netflix and pop a pill or two. Thousands of calories later with the emotional pain still as strong as ever and the physical guilt of what I am doing to my body weighing down on me, it was time to do it all again. I was suffering from financial, emotional, mental and physical destruction. Unemployed, broke and living back home with no dream and hope for the future, I looked at myself in the mirror disgusted by what I saw and told myself that my dream is to lose weight and be happy.

I had to make a choice to change my life but the hardest part was to believe that it could happen to me. I knew that if I wanted to achieve me dream, I had to see it, believe it and action it. If I wanted to release the weight I carried on my body, I had to release the weight I carried on my mind. I had to reprogram my mind to see the world in a completely new way and I had to trust that I am worth it and deserve it. So I started with changing what I was feeding my mind by listening to motivational content and cutting out the feel good junk. I found that by doing this, I began to take control of my relationship with food; I was drinking more water and actually enjoying it. A trick I learnt was to infuse my water with fruits and veggies to give it a bit of taste and learnt that by keeping it in the fridge easily availed made drinking it an absolute ease.

An important part of my journey was the realisation and acceptance that my body is the only vessel that is carrying me through life and if I wanted the best, I had to give it the best. This led to me researching Intermitted Fasting which I started, and watching closely what I eat opting rather for vegetable and salads – I joined then the Greens team. The power of the spirit is truly astonishing, using my two personal P’s-Phahla and Prayer- I found that was able to be patient with myself as I embarked on this never-ending journey of healing and weight- loss. I needed the support however, I was not in a position to share with anyone, so my ancestors and God became my own personal diary, day by day, the feeling of loneliness began to melt away.

Fundamental to overall wellness is building social connections and as my relationship with myself and my feelings towards myself started to take a more positive turn, I realised that it made it much easier to connect and build with others. If you can dream it, see it, believe it then action it – you can achieve it. We tend to carry the weight of the world on our shoulders and this more often than not blocks us from living out our purpose and true potential here on earth. It vital that we practice self –love on a daily basis through consistent discipline and action.

If we want to keep the weight off, we need to remain committed to our commitments. You need to accept that life is going to happen to you, but you need to push through. So when things so go south, you do not go with them. Patience is key, so don’t beat yourself up when you fall of the bandwagon, just make sure you get up, dust yourself off and get right back.

Love and Light all the time. 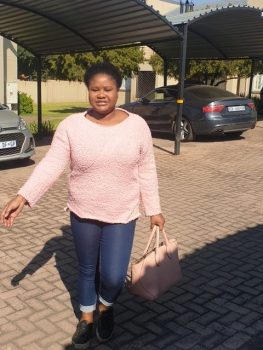 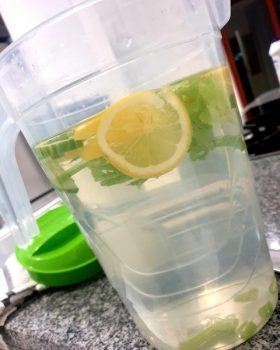 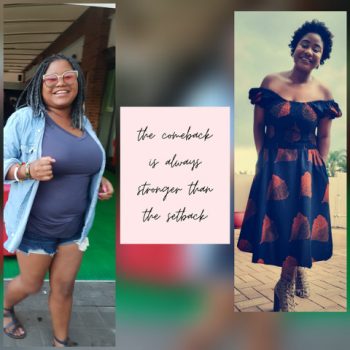