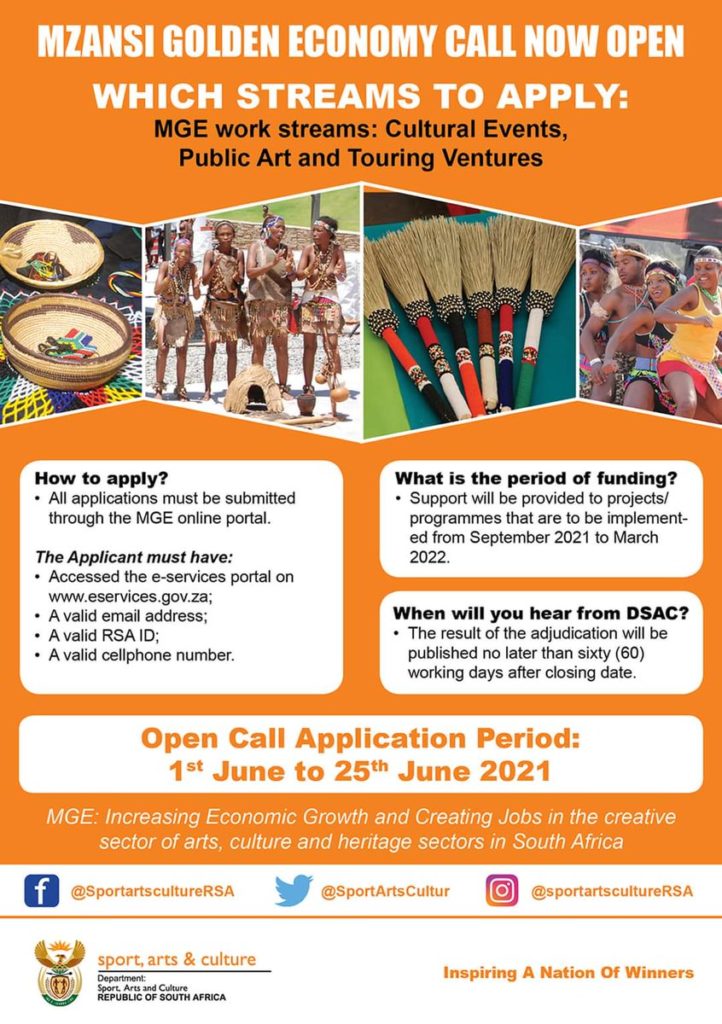 THE CREATIVE INDUSTRY, AN UNTAPPED ECONOMY WITH A LOT OF POTENTIAL

South Africa is known as one of the biggest economies in Africa ($282.59bn). In fact, it had the third highest Gross Domestic Product (GDP) in the year 2020, with only Nigeria ($442.98bn) and Egypt ($361.88bn) ahead of it, according to Statista.com. This may sound like something worth celebrating, until you remember that just seven years ago, we were the number one economy in Africa. Nigeria took a leap past us in 2014 and has never looked back ever since. I am not going to pretend to be an economist by giving an analysis of where we went wrong or prescribe untested remedies to this. I’m just a creative writer who knows the immense economic contributions of the cultural and creative industries (CCIs) to the country’s GDP and alleviation of the scourge of unemployment. As a mineral rich country, I believe that the cultural and creative industry is one bottomless gold mine whose true riches we have yet to fully exploit.

Countries like the USA are world economic superpowers, not because of their mineral resources, but because of their CCIs. According to the National Assembly of State Arts Agencies in 2019 the value of arts and cultural production in America was $919.7 billion, which contributed 4.3% of its GDP. This contribution is bigger than those from construction, transportation and warehousing, travel and tourism, mining, utilities, and agriculture industries. A 2019 report by the Parliamentary Monitoring Group (PMG) reveals that in 2018 in South Africa, the cultural and creative industries contributed R63 billion to the GDP, which amounts to 1.7%. Does this mean that the American cultural and creative industry is bigger than ours? I beg to differ. Economically, maybe, but even that is because American culture (mainly through music, television, and film) is the most exported across the world. Such an omnipresence could not have been achieved without significant investment injected into the cultural and creative sector. This is one of the areas that we need to focus on if we are to improve the sector and rise to the level of economic superpowers like the USA.

I must applaud institutions like the Department of Arts and Culture (DAC) for investing in the cultural and creative industries through initiatives such as the Mzansi Golden Economy (MGE), however, Government alone will not win this battle. The private sector also needs to step in and make significant investments, not only financial but also in other forms, such as infrastructure, training, and others. Not forgetting the communities from which these creatives come; we should make consuming a product by a local artist a norm – and most importantly pay for it. The cultural and creative industry is the fastest growing economy, growing at an average rate of 2.4% per year between 2016 and 2018. This, according to the South African Cultural Observatory, is a better performance compared to the whole South African economy, which grew at only 1.1% per year in the same period. With enough support, it would not be impossible for the cultural and creative industry to double what it currently contributes to the country’s GDP in. This is what the creative economy is about.

Unlike traditional sources of economy, like mining, the cultural and creative industries derive their value from creativity and imagination, which will never run dry – hence I used the metaphor of a bottomless gold mine.

Apart from the economic contribution, the CCIs contribute to the labour market. In 2017, the creative economy accounts for 7% of all the jobs in South Africa, which amounts to about 1.14 million jobs. This industry that does not only contribute to the creation of jobs for artists but for people in a variety of fields. Take a typical film production as an example; the jobs created from this would range from scriptwriter, set designer, make-up artist, driver, catering, prop master, hair stylist, camera operator, actors, location scout, electrician, sound mixer, production assistant, colourist, composer, etc.  and these are not all of them. The same is true for theatre and touring ventures.

Imagine the contribution the cultural and creative industry, with significant financial backing, can make in the fight against unemployment. As much as we decry the scarcity of funding and resources, it is also incumbent upon us to take advantage of the opportunities when they present themselves. In fact, we should be proactively hunting down the opportunities and knocking on doors of both government and the private sector, instead of waiting for an open call for applications, which almost always results in a “traffic jam” and frustrations dues to last minute applications.

Visit www.eservices.gov.za to apply for the Mzansi Golden Economy. Applications close on 25 June 2021.